The American India Foundation was founded in 2001 after the tragic devastation caused by the Gujarat earthquake in 2001. President Bill Clinton and Prime Minister of India Atal Bihari Vajpayee, recognized the need for a philanthropy platform that would connect the world’s two largest democracies. Then provide a trusted bridge for meaningful participation in India’s democratic and economic growth for both Americans and Indians. The American India Foundation since built on this vision and worked on creating opportunities for India’s poor to live successful, productive lives. All while creating impactful change at a large scale, changing the lives of more than 3.1 million of India’s less fortunate.
The mission of AIF’s Digital Equalizer (DE) program, is to advance the use of technology to engage, enrich and empower India’s under-served children. DE seeks to bridge the digital and educational divide in India by providing computers, software, Internet access and training to children and teachers in underprivileged schools across India. The program blends information technology literacy training (learning how to use computers) and computer-aided learning (learning to use computers to learn other subjects). This is so that students learn to use computers, not as an end in itself, but as a means to furthering their education.
“DE centers are established in middle and high schools and cater to students between the ages of 10 and 15.  The centers consist of computers, Internet connections, software and digital curricula. Each center is supported by a facilitator (one per school) and a coordinator (one per cluster of 5 to 10 schools).  AIF supports each school for a period of three years and assists schools in developing other funding sources for self-sustaining the program.” (from: AIF Digital Equalizer Blog) 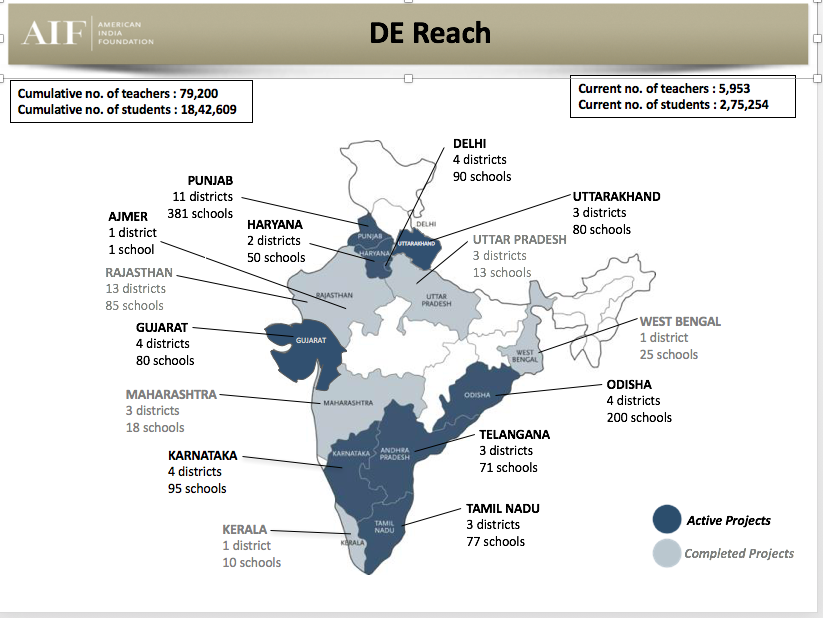 I had the opportunity to attend AIF’s New York gala in June 2016 and became fascinated by the DE program. The ways in which the organization worked to scale the program to have tremendous impact on teacher education, and as a result, on students.  As a STEM educator and researcher based in the US who is interested in improving social justice through STE(A)M Education, I was thrilled to learn about this impactful program that is spreading through various parts of India and improving educational quality through teacher education and thoughtful use of technology.  This program is inspiring because of what it is achieving despite the scale of the problem it is addressing.
I reached out to AIF who put me in contact with Sundar Krishnan, Director of the Digital Equalizer Program.  Below is the first part of an email interview with him.

Why do you do what you do – that is,  head up the Digital Equalizer program at the America India Foundation?

I started doing this work because I was good at the digital part of it and had the background required to head the ICT for Development vertical at AIF. I think we should do things which we are good at. I realized the importance of my role when I started seeing change in some of my team members’ abilities. For instance, I had a team member who did not utter a single word in one of our 2-day review meetings. Two years down the line I could see that she could confidently speak in front of senior government officials. That is transformation.  One of my other team members rose to the occasion and went and met the State Director (an Indian Administrative Services officer) in my absence in Rajasthan during one of our important meetings. He was so elated by the experience that he was in tears.
I have a team of 220 people across India. My task is to empower them, and to create possibilities for them and through them to the schools. I feel that any activity we do should be socially responsible. If you are good at something and have a larger vision than merely a personal ambition, you will naturally make sure that benefits spread.

What are you most happy and proud about with regard to the DE program?

The DE Program allows me a lot of freedom to innovate and put ideas to work. The feeling of ownership is immense. The diversity and richness in work is of a different order. There is no monotony in working in DE—every day is a new challenge. It is very satisfying to solve the problems which we encounter on the ground. I’ve enjoyed the recurring challenge and the change one can bring about in often adverse situations in which we are often caught.
During this 12 year journey, there have been several milestones and initiatives about which I am proud. The design of the Digital Equalizer Way of Teaching, or DEWoT, itself came out of our insights and experiences in the field. There are many other things like designing Flipped Classrooms for government schools, strategizing for the the bottom 20% students to enhance their learning levels, giving voice to students through digital storytelling projects.
In essence, I treat the DE program as a platform for innovation in the context of public educational reform – wherein technology is the vehicle. This affords us the ability to integrate new trends and regularly pilot new initiatives such as the above. The idea of flipped classrooms—where the normal teaching time in classrooms is “flipped” by having students spend time outside of classroom learning lessons through video, and instead using classroom time to work through the content hands-on—was an exciting idea for the DE program, as it was one of the first applications of leveraging technology for improvement outside the classroom. This enabled classroom time for us to increase the focus on student engagement, a student-centric approach to meet students during their current learning trajectory and support their learning gaps and help cultivate the critical thinking and problem-solving skills to enhance their learning.

Given that Digital Equalizer has worked in so many states and impacted more than one million children, what goals remain?

Indeed, there are too many goals to list! As our work and education itself are modeled upon the idea of continuous learning and improvement, there will always be goals in education, whether they are through the DE program or other avenues. In our context, a few important goals we are working on include:

Can you tell us about someone in the DE program – a student, teacher, principal – who has motivated you?

There are so many that this will be a difficult task to choose! Let me share a recent one. We identify students and pick those whose stories are compelling and inspirational. When we select students, we have a due diligence process and I personally interview them. Every year I have some reason or the other to stay inspired and this year it was Keerthana,with whom I travelled to the US in June, 2016 for our gala in New York City. I must tell you her confidence and ability was amazingly impressive especially considering her background. She comes from a family where her father makes less than 100 USD per month working as a mill worker. She is a consistent high performer and was travelling for the first time, not only to the US, but outside of Coimbatore in South India where she studies. She spoke in front of a large audience in Richmond and New York without referring to her notes. What a performance!!!  Through technology, Keerthana has not only gained new perspectives and new tools to enhance her learning, but has also gained the confidence and agency in herself to take charge of her education and seriously pursue her dreams.
In the phrase “Digital Equalizer,” the idea of equalizing is about creating a level playing field through providing opportunities for the less privileged. The goal is to help students to develop an ability to participate in the world of work, creating choices and imagining a different future. Keerthana is a great example and ever since she visited MIT in Boston she has started imagining a different future for herself. When I see students like Keerthana I feel not only motivated, but equally if not more inspired.
Here is a short video with an overview of AIF’s DE Program Goals and Strategies:
https://www.youtube.com/watch?v=17aKTIJ0GcA

Sundar comes from a humble middle class Tamil Brahmin family born and brought up in Delhi. He studied at Delhi University where he did M.Sc in Electronics, and thereafter obtained an MBA from the Faculty of Management Studies. Software and Information Communication Technology are in his DNA. Before AIF, he worked at the Media Lab Asia, a joint initiative of MIT and the Indian government’s Deptartment of IT, where he was managing ICT programs for the masses. He is happily married with two children. His wife is an Economist with a leading Public Sector Unit in Delhi. Their son is in grade 10 and their daughter is in grade 5.