Math and Fiction? Math and Social Change? by Wendy Lichtman 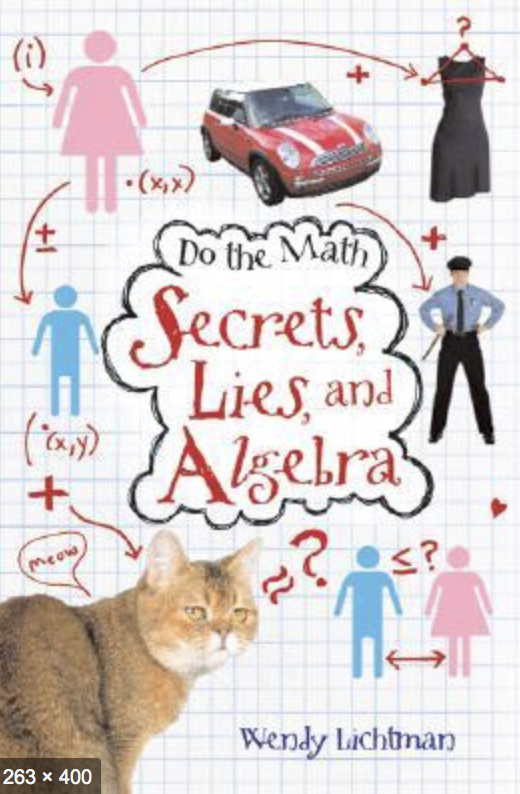 The only reason I hate quadratic equations is that there are a lot of ways to solve them. Sometimes the directions will say, “Solve by factoring” or “Solve by completing the square,” so fine. But if it just says, “Solve: y = x 2 – 2x – 3,” then you can sit there a long time wondering, Okay, great, but what exactly am I supposed to do? Where am I supposed to start?
That’s exactly how I was feeling. I was thinking about what my so- called friends had done, and I was wondering: What exactly am I supposed to do?
I guess I could start with Miranda because she’s been my best friend all through middle school, and if someone is your best friend, you should be able to ask her straight out: Did you talk about my private business with other people?
Or I could write Sammy a note that said, “How would you like it if I told people your secrets? How would you like that, huh?”
There’s no reason to start with Lynn, because Lynn will just lie.
When Marcus raised his hand and asked, “Why are we supposed to care about this?” which is the same question he always asks, people laughed.
But Ms. Saltzman took it seriously, of course. “How can we figure out how far and how fast objects will travel?” Ms. Saltzman asked, and even though nobody answered her question, she said, “Yes! We use a quadratic equation!”
Then she looked at Marcus, and said, “We care, Marcus, because this is the beginning of the study of physics.” She was sort of whispering when she said the word. “Quadratic equations are very
important,” Ms. Saltzman said, “because they are the way we can trace the path of a moving object.”
Okay, great. But what I wanted to know was this: How can you trace the path of gossip? How do you know who started it, how far it went, and who else in the school knows your secret? If you want to tell me something very important, I thought, you could tell me the formula for that.
And here’s what I’d like to know: how can we best convince kids of both genders and all races that they just might be talented at math? How can we help them see that the study of algebra develops conceptual thinking, keeps them from being ripped off by the phone companies, and gets them into college?
God, I’d love a formula for that.
About Wendy:

Wendy Lichtman has written personal essays for the Washington Post, New York Times, San Francisco Chronicle, National Geographic and Good Housekeeping, among other national publications.  She is the author of Secrets, Lies, and Algebra and Writing on the Wall.  She holds a degree in mathematics from the University of Michigan and is the Math Intervention Specialist at MetWest High School in Oakland, California.  When she decided to write about a teen who comes to understand that some questions have more than one right answer, Wendy felt that algebra, with its unknowns and variables, was the perfect metaphor.

You can find out more about Wendy Lichtman by going to her website.
You can also read some of her other book, Writing on the Wall.
For more STEM in Books, read our other articles in the talkSTEM Forum: