talkSTEM in the Media & News

Eight Area Women Leaders Honored For Their Work in STEAM

Executives from Texas Instruments, talkSTEM, and The Beck Group are among those recognized.

Read The Story From D Magazine

Local educators created videos and printable activities to help caregivers get their kids engaged in STEM this summer.

Teachers, students and families from around the Dallas-Fort Worth area are invited to participate in the fourth annual Pi Day Math Festival where real-life applications of Science, Technology, Engineering, Arts and Math (STEAM) are on full display by nearly two dozen exhibitors.

JGD Publishing Partners with talkSTEM to Donate 1,000 Books to Pre-K, Kindergartners as Part of National Read Across America Day

As part of a national initiative to increase literacy and promote math and science learning, JGD Publishing has partnered with talkSTEM, a Dallas nonprofit, to donate 1,000 copies of “Good Night Dallas walkSTEM Edition” to local elementary schools as well as coordinating “read alouds” to Pre-K and Kindergarteners around the city.

STEM, STEAM, STREAM: “In Dallas, the Ingredients are Here.”

Dallas-Fort Worth has the pieces—educators, nonprofits, corporations, technology, and the will—to be known as a hub for innovation and technology, our panel agrees. But, to attract and prepare the next generation of world-class talent, we need action. (Published October 18, 2019)

Read the story from Dallas Innovates

On Pi Day, Let’s Disrupt Our Narrow Notions of STEM

A festival in Dallas shows how these fields connect to most spheres of human activity, including the arts, humanities and design. (Published March 14, 2019)

Hear the story from Scientific American

Using the Outdoors to Teach STEM

Hear the story from Edutopia

Science in the City Underway in Dallas

SMU, UNT Dallas, UTD and the Perot Museum partnered with The Dallas Morning News so the public can meet with top scientists. It’s open to the public. (Published Monday, Mar 18, 2019)

Hear the story from NBCDFW

To keep girls in science and math, we have to change a hostile culture

In this era of #MeToo and female empowerment, we need to do more to remove the gender gap associated with our girls and women pursuing careers in science, technology, engineering and math. There probably isn’t a day that passes when you don’t hear the term STEM in the news, in a conversation or from the mouths of parents who are trying to find “the angle” to get their child a scholarship or a job. The disappointing reality is that while many girls are strong at math and science in their middle school years, they are far more likely to opt out of higher level math classes while their male counterparts stay in.

DALLAS, March 4, 2019 – Teachers, students, and families from around the Dallas-Fort Worth area are invited to participate in the third annual Pi Day Math Festival where real-life applications of Science, Technology, Engineering, Arts and Math (STEAM) are on full display by nearly two dozen exhibitors.

The festival is organized by the nonprofit organization, talkSTEM in partnership with the AT&T Performing Arts Center. 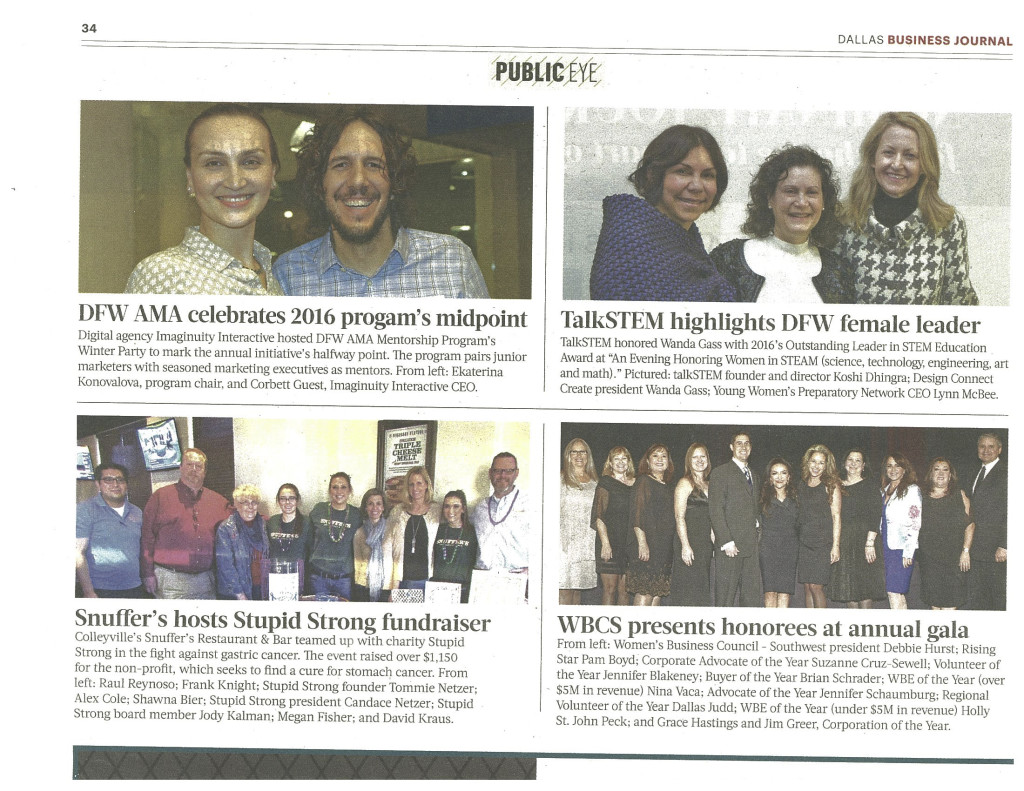 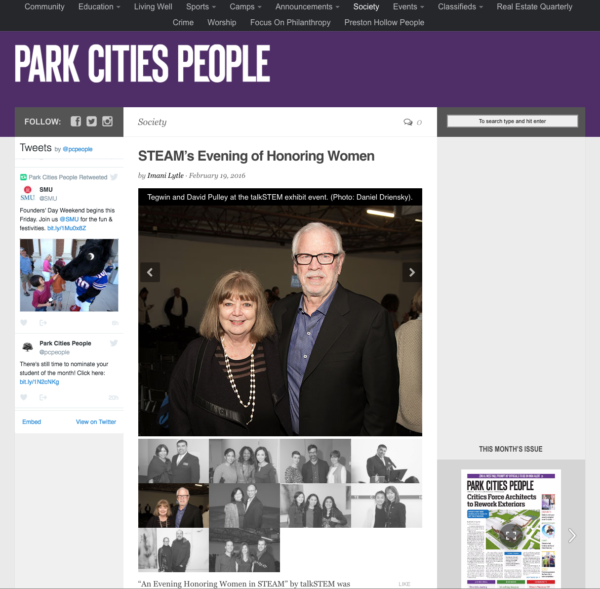 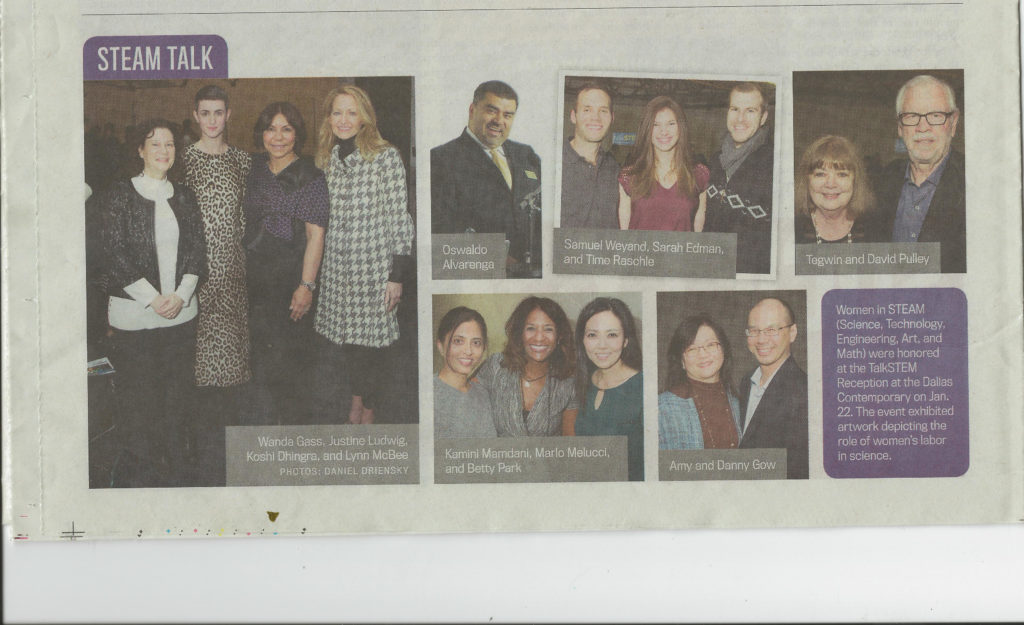 Want To Teach Kids About Math And Science? Take A Stroll Through The Dallas Arts District

Read the article from KERA News

A new series of monthly walks will encourage students to explore math and science concepts in everyday surroundings.

Read the article from Dallas Innovates

For many students, it will become the walk of life

There’s a big push in education to boost students’ math skills. One group hopes to do that by taking elementary and middle school kids on a series of math- and science-focused walks through the Dallas Arts District.

Read about Glen Whitney, Founder and Director of the National Museum of Mathematics and his math walks in New York City, who designed our walkSTEM experiences in the Dallas Arts District and in NorthPark Center.

Read the article from The New Yorker

It’s not just about numbers or problems in a textbook. Good Day gets an exciting view of Math in a series of new events starting next week. Dr. Koshi Dhingra from talkSTEM.org talks about Dallas’ Pi Day Festival and examples of math in our everyday world.

Hear the story from Fox 4

The walkSTEM program is designed to get students, faculty, and educators to see themselves as math doers, learners, and STEM practitioners.

Math is all around us

Watch the video created by our friends at SMU about our launch on Pi Day, 2017!

Read the articles here and here

Every child is a STEM child, Every space is a STEM space

talkSTEM works hard to make unique and high quality STE(A)M educational content freely available to all children. We partner with such youth-serving organizations as Dallas ISD, Girls Inc, Imagine Science, and more. Every dollar you contribute goes directly to our educational programming and content creation that reaches under-resourced student populations. Please support us.