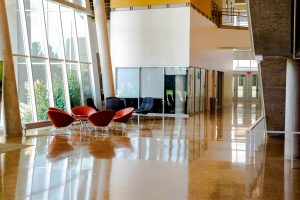 How can we see objects and scenes in the real world as computing or computer science? The answer to this question is based upon a more traditional topic: seeing math everywhere. Computer science along with computational thinking are extensions of mathematical thinking.

The set of videos below was created by graduate students in Computer Science and ATEC (Arts, Technology, and Emerging Communication) at the University of Texas at Dallas (UTD).  This assignment was given to my students as part of a collaborative project with talkSTEM founder and director, Dr Koshi Dhingra. She and I were interested in designing a new set of short videos that would be freely accessible by middle school students who visit our campus as well as by students, teachers, and all interested to go on a unique, virtual tour of our campus. These videos would allow students to not only tour our campus (either virtually or in person during field trips) but also provide a different lens through which to view some campus structures. Each team of 2 or 3 graduate students was responsible for a single stop in a Computational Thinking-based walking tour around campus. The tour consists of a total of eight stops. We initially used these videos as the basis for a fun activity for a group of middle school girls who visited the UTD campus for the Women in Tech panel discussion. These videos will, we hope, serve as a useful set of examples for Teaching Computational Thinking- one that will encourage middle schoolers to view the structures they view in their own environments through the lens of computational thinking.

The students were asked to choose a recognizable object on the UTD campus, like the Love Jack sculpture (located in the ATEC courtyard) or the Mist Pool (located near the campus hub). Students were then asked to model these objects using things that they have learned in doing computing. For example, when the mist pool steam vents are operating, you will see steam floating out of the vertical column inside the pool. This behavior can be captured using a computer program. The computer program becomes a mathematical model of the mist pool.  Students might try to represent the mist pool as a structured piece of information, such as a data structure. These abstract structures (computer programs and data structures) come directly from early research in mathematics. And so, we can learn to see the world as a form of computational thinking just as we can also ask mathematical questions.

I hope that middle school learners and teachers will use their Computational Thinking to view some of their favorite objects and environments. They can use the Create Your Own walkSTEM framework as we did to organize and share their perspectives or STEMLens. The latter is a more abbreviated activity involving photos but would still provide you with the opportunity to develop your computational thinking abilities and to share. Here are two sample student activity sheets that I developed in partnership with talkSTEM that middle school teachers can use with their students.

Here is the Assignment I gave my Graduate Class in Computer Science:

I hope that educators in schools, colleges, and other learning spaces will free to adapt this assignment as it suits their learning goals and environments.

Goals:  This is a team project where you will create a flyer and a video that describes an object on the UTD campus. The object will be modeled using a diagrammatic modeling method that is easy to understand. I am attaching a flyer I did for the Love Jack. Note that there are 3 models of the Love Jack: (1) a brief English set of commands, (2) a concept map, and (3) a data flow model.

Models: You are free to reuse the same model types that I did for the Love Jack object (see image below).

The first model is a set of instructions, which when followed recreates the object (even if only a rough approximation). The concept map model just describes what is in the scene where the object is located. The data flow model shows a process associated with the object (e.g. recreating it).

Paul Fishwick joined UT Dallas in January 2013. He is Distinguished Endowed Chair of Arts and Technology (ATEC) and Professor of Computer Science. He has six years of industry experience as a systems analyst working at Newport News Shipbuilding and at NASA Langley Research Center in Virginia.

He was on the faculty at the University of Florida since 1986, and was Director of the Digital Arts and Sciences Programs there. His PhD is in Computer and Information Science from the University of Pennsylvania. Fishwick is active in modeling and simulation, as well as in the bridge areas spanning art, science, and engineering. He pioneered the area of aesthetic computing, resulting in an MIT Press edited volume in 2006.

He is a Fellow of the Society for Computer Simulation. He served as General Chair of the 2000 Winter Simulation Conference (WSC), was a WSC Titan Speaker in 2009, and delivered over fifteen keynote addresses at international conferences. He is Chair of the Association for Computing Machinery (ACM) Special Interest Group in Simulation (SIGSIM). Fishwick has over 200 technical papers and served on all major archival journal editorial boards related to simulation, including ACM Transactions on Modeling and Simulation (TOMACS) where he was a founding area editor of modeling methodology in 1990.

He actively pursues new connections between ATEC and STEM areas such as mathematics and engineering, especially computer science. His research area is in modeling and simulation. He is Director of the Creative Automata Laboratory which has a goal of exploring new representational approaches to automata as well as mathematical and computational models.

Please sign up to join our community and receive notifications about new content. We share perspectives of thought leaders in the STEM learning ecosystem as well as talkSTEM’s original content. It’s all designed to engage and inspire our youth and to grow strong STEM ecosystems everywhere!

talkSTEM promotes conversation about the diversity of STEM and STEAM thinking in our daily lives, in our communities, and in our world