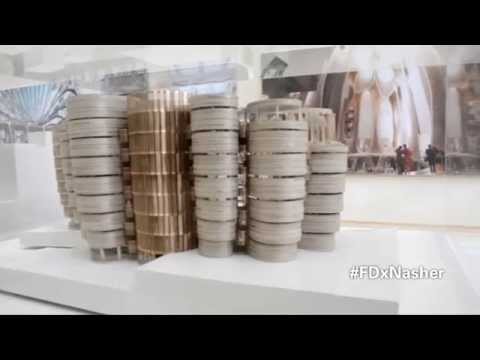 Blogs, Careers in STEM/STEAM, Out of School Learning

329 views
11 min read
1,138 comments
FacebookTwitterRedditPinterestEmail
I visited the Nasher Sculpture Center (one of my most favorite spaces in Dallas) last fall to view the exhibition Provocations: The Architecture and Design of Heatherwick Studio. Not only did I love the amazing structures the studio designs, but  I was absolutely taken by the overarching questions and responses next to each model. These questions were the “provocations” that the exhibition was named after. They were the crux of the design process, the guiding hand that led to the final design. They also are very reminiscent of questions used in scientific investigations. Here are some examples of Heatherwick’s provocations:
Can you squeeze a chair out of a machine, the way you squeeze toothpaste out of a tube? How can a building represent a nation? Can a whole boat be made from its hull?
Can you make a park out of a desert?

Can a building help change the way we learn?

Can a rotationally symmetrical form make a comfortable chair?

I met with Jed Morse, Chief Curator at the Nasher Sculpture Center, to talk about the exhibition that was at the Nasher Sculpture Center in Dallas until January 2015. It is currently at the Hammer Museum in Los Angeles through May 2015. Thomas Heatherwick, who you can hear from here, is 45 years old and did his graduate work in design at the Royal College of Art in London. Jed’s perspective on the work done by the Heatherwick studio and its relationship to STEM practice follows with design.
One of the interesting things about the way the Heatherwick studio approaches the creative process is its relation to scientific methods. They tend to distill a commission down to an essential question or provocation and then, in order to answer that question or to solve that particular problem, they use the process of creating models to test their ideas. They may come up with an idea and then they’ll create models to visualize it, see it in action and change or refine it. There is a sense of constant testing within the studio. A lot of architects work with engineers on a variety of levels and Heatherwick studios is no different. However they tend to go further by basing their ideas a lot of time on methods of fabrication, industrial processes, learning about those and thinking of ways to use them. They tend to use existing materials and processes in new ways.
For example, the extruded furniture came out of a fascination with the extrusion process. They were amazed that with enough pressure, you could force a piece of steel through a die and create a 3-dimensional form from a 2-dimensional image. Instead of using this process the way that it is often used, for creating very precise and exact channels for industrial uses that can be run off by the thousands, they decided to use this process to make a variety of different objects. (According to Wikipedia, extrusion is a process used to create objects of a fixed cross-sectional profile.) The part where the extrusion first comes through the die is kind of mangled and it curls till it finds its form – that part is normally cut off in the fabrication process. And yet, that was the part that they liked so they had to work with that. That’s what makes each one unique. They were constantly having to stop and start the extrusion machine.

Another example of how they used existing materials or processes in new ways is the UK Pavilion, made for the 2010 World Explo in Shanghai. Here, the studio essentially used the fenestration of a building as its actual physical support, propping up a building on thousands of acrylic rods that channel light into a building but which also serve as its structural support for the edifice.
With the Hairy Building idea, which was conceived for a building in London, the studio was asked to make a sculpture in front of an ugly building. Their reaction was that they would much rather make the building more interesting. They were fascinated with this idea of a hairy building and perforated the exterior of the building with all these acrylic tubes to give the façade a bit of interest. So doing this was for them a much more interesting question than just placing a sculpture in front of it. This project was never realized but the idea later served as the basis for the UK Pavilion.
A lot of the work they’ve done at Heatherwick Studio is through competitions. For the World Expo, each nation is given a plot of land and most countries max out that site. At the bottom of the brief for the competition, it said the design needed to be in the top 5 of the designs in the Expo. The studio focused on that and reconceived what a national pavilion is really for. The building only occupied a quarter of the site and left the rest of the site open as a sculpted exterior. It became the most popular pavilion because it afforded people the space to move around but also because the building that they constructed focused on this one tiny thing that has a global impact. It was the millennial seed bank at Kew Gardens in London where they’re collecting thousands and thousands of seeds from all over the world. To highlight this they created an interior space. Cast in the acrylic at the ends of the tubes are seeds from the seed bank.

How did the exhibition, Provocations, come to be and where will it go next?
After its time at the Nasher, the exhibition will go to the Hammer Museum in Los Angeles and then to the Cooper Hewitt Smithsonian Design Museum in New York. The Nasher has been working on it for 5 years. The curator was a guest curator, Brook Hodge, a former curator of architecture and design at the Museum of Contemporary Art in Los Angeles. She had been following Thomas Heatherwick’s work and visited his studio several times dating back to 2001/02. In planning, you go through many discussions of what it is that the exhibition really needs to do. This was the first North American presentation of the studio’s work and we were aware that we would be giving people a sense of what distinguishes the studio in terms of their methods and their practices while also highlighting a number of the projects.
What do you think Thomas Heatherwick’s take on STEM/STEAM (Science, Technology, Engineering, Art and Math) education would be?
I think that Thomas Heatherwick would be incredibly enthusiastic about STEM/STEAM education. He has always advocated for a collaborative approach because he found that when he got in a room with a fabricator or engineer or someone who had some technical expertise and got into a conversation with them, that’s when the ideas really began flowing. It is that collaboration and the understanding of the technical side that really sparks his imagination. That holds true with the way the studio operates. Teams work together on projects and everything goes through review internally within the studio before it gets out to the client. The whole studio has a chance to hear about the project, look at the development, think about it, add their own suggestions or critiques to it. Each project ends up going through multiple iterations through a constant process of investigating.
What about your experiences as curator and your relationship to STEM/STEAM?
As museum curator, it’s important to know that you are dealing with objects. Even paintings have a physical presence, and so they are 3-dimensional and have to be dealt with as objects. Sculpture, in particular, is often heavy, difficult to move and install, and frequently requires working with engineers to determine how one does those things.
One of the first things I had to do at the Nasher, in planning for the initial install, was to figure out how to transport the Richard Serra sculpture from the plaza in front of the Dallas Museum of Art (DMA), where it had been on loan for several years, into our garden. The sculpture consisted of 2 Cor-Ten steel plates that are 44 feet long, 14 feet tall and 2 inches thick. Each weighs about 50,000 lbs. Suddenly you’re looking at structural engineering drawings to figure out what you need to support that object. I started working with professionals such as structural engineers, construction managers, architects, and companies that specialize in moving works of art and all of the kinds of challenges that come with it. You would think that a massive Cor-Ten steel plate is pretty impervious but it’s very fragile because it has an incredibly long-term material memory. So if you make any mark on the surface, it stays for a long, long time. That’s why it’s used for ships so that once you have that oxidized surface, it seals and protects the steel underneath. We only had to move it 2 blocks (the DMA is that close to the Nasher Sculpture Center) but it was very difficult to do. The only way to do it was to lay it down on its back. There was some concern about the curvature of that plate loosening or easing. If that happened, the very discrete 8-inch square steel pier caps that they were supposed to meet when they were installed in the garden, would be out of place. We had to devise a way for this very short ride to ensure that the curvature of the plate did not change. That was nerve racking!

Art and Science often viewed as completely contrasting pursuits. Unnecessarily and, frequently, inaccurately so, in my opinion.  Significant differences do occur, the greatest of which is the contrast between the community aspect of science (peer review) versus the lack of the same requirement in the arts. With this, at least in the same, formal manner. However the methods do overlap a good deal, as Jed reminded me. All artists need to know their materials and the constraints they have in order to work with them. The creative process in the arts and science and engineering involve teamwork and multiple iteration designs. Essential questions (parallel to Heatherwick’s provocations) guide the work done by STEM practitioners and many other creative minds in the arts as well. Here is a short video of a Project Manager from Heatherwick Studio speaking about his work.
STEAM curricula, when conceived thoughtfully, highlights the relationship between Arts and Sciences. Here are some “provocations” that come to mind as I mull over the intersecting worlds of Art/Design and STEM:
How can we as parents and teachers help children see that the Arts and STEM are both important aspects of the human endeavor (and have been for most of human existence)?
How can we help children see themselves as artists/designers as well as scientists/engineers?
How can we develop our own appreciation for and skills in both the arts and the sciences, regardless of what we do at work?
As you consider these questions, you might like to visit the Rhode Island School of Design’s STEAM site: http://stemtosteam.org. STEAM is a movement championed by Rhode Island School of Design (RISD). Their objectives include integrating Art and Design with STEM education and practice.

Jed Morse has an undergraduate degree in art history from Middlebury College. He brings his son and daughter to the Nasher frequently. Now, of course, they associate every sculpture they see around town with the Nasher and their dad. They also love going to the zoo and science museums, jumping on their trampoline, doing puzzles, building with blocks, and reading. They also love finding the designs in everything.