STEM Professionals in the Classroom I 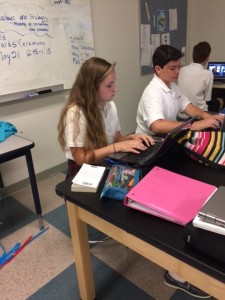 This week, the group of students participating in a final exam STEM project met with a design expert from Dallas. We were put in touch with this person by Nepris. Nepris is a company that has developed a platform for educators to use to enter information about an upcoming STEM project in which they would like to connect their students with industry professionals. Last fall I decide to try the Nepris platform with a thermal energy project I had in mind for the spring final exam. I teach 8th grade physical science at an independent school in Dallas. As a progressive school, we have purposefully and thoughtfully integrated STEM into our middle school science curriculum for over four years now. Our school has a Design Den with over 4000 sq. ft. of space in addition to well-equipped and large lab spaces for every grade level. We are a “bring your own device” school. Students come to lab equipped with laptops, tablets, and cell phones.
Students have a choice this year of what they do for the final exam. One of the options was this group project STEM about thermal energy, specifically to design a passive thermal energy efficient home located in a neighborhood in Dallas. The budget has no limits! Creatively, the students could design whatever they wanted for their house. Landscaping, windows, furniture, and hardware – everything was up for grabs.
Students volunteered to do this project, and we ended up with a group of 11 students. Most were in one section, but 3 were in two other sections. A project manager was chosen, a research team assigned, and 2 students acted as the computer techs that would make the final design using Google sketch-up. The team as a whole used a Google doc to communicate their work with each other and with me.
The students then met with the professional that Nepris chose to connect with us. Before the meeting, they developed a series of questions they wanted him to address. During the 40 minutes face-to-face time via the computer, questions were texted to him via a group text, and he answered them as they appeared to him on his screen. He also added some information that followed up on certain questions. He showed them CAD drawings of some suggested designs and used a white board to do some live drawings to illustrate a point he was trying to make.
The benefit in having a live expert in the field for the students to work with was manifold. Students became interested in the project when I told them this would be a part of the experience. They also liked the fact that someone was there to help them besides me! As much as they adore me, they see me every day! A new face is exciting. A professional who specializes in a particular field has a distinction that is palpable with the students. During the face-to-face session, the students were attentive every moment. I have never seen them so focused! After the meeting with him, the energy level of the group shot up. They began to organize the notes and drawings they had made during the presentation. Two tables were quickly moved together so everyone could see each other and the words began to fly.
It is gratifying to see the effects of STEM on the students: collaboration, cooperation, planning, skill development, confidence building, and critical thinking. It is hard to quantify the creative process, but I know it when I see it! I am stepping back unless asked by the students to contribute an idea or help with a problem. I am anxiously awaiting the final design. When they are done, I will sit with them and let them explain the reasoning behind their choices. The enthusiasm is reason alone for integrating STEM into a curriculum.

Margaret McEwen is a teacher at Parish Episcopal School in Dallas. Her B.S. in biology is from SUNY&nbsp;Brockport and her MLA degree is from TCU. She taught middle school and high school science for over 20 years. A former medical technologist, her love of teaching and all things science became spawned by an incredible teacher she had in high school, Charles Collins. She seeks to make science an active part of her student’s lives by exposing them to science as it exists in their daily lives. Margaret firmly believes science is revealed by doing, and students in her classes have opportunities to personalize their learning. She was instrumental in bringing STEM into the middle school science curriculum at her current school. Follow her professional life on Twitter @MMMcEwen