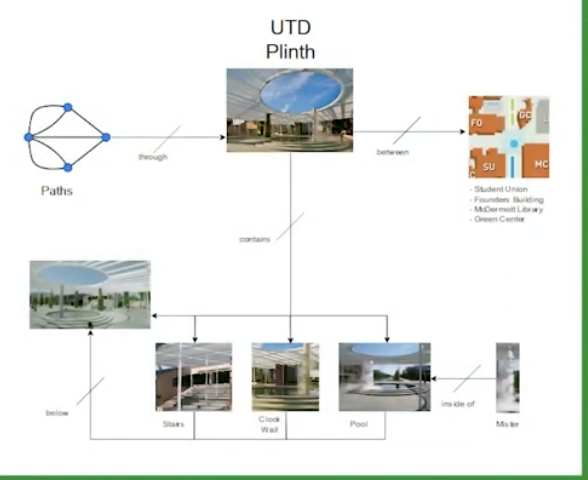 Modeling the World Around Us: A Great Activity to Build Computational Thinking in Middle Schoolers #STEMEducation #CareersinSTEM

This project was done for a University of Texas at Dallas class on modeling and simulation. For a similar blog post on computational thinking activities for middle schoolers, make sure to read Prof. Fishwick’s blog post, Teaching Computational Thinking in Middle School. By sharing engaging, easy to do, yet conceptually rich activities, we hope that teachers will facilitate the growth of STEM mindsets in their students. This will develop future STEM and STEAM leaders who enjoy solving problems in unique ways and seeing the world around them through their #STEMlens.

The theme of this project was to study a building on campus and then interpret or analyze this building using one of the models taught in the class. A model is a simplified representation of something. While most models we know visually resemble the object that they are modeling, there are also modeling types that describe information about a thing, or the behaviors of things. Most of the models from the class are in this second category—the models do not visually resemble their targets (buildings at UTD). Students showed their modeling in the walkSTEM video playlist: walkSTEM@University of Texas at Dallas.

The students refer to a variety of different model types covered here:

Code (or Program): a model of logic and decision making (modeling a brain)

Control Flow: a model of code in the form of a flowchart

Data Structures: parts of a program where data are organized into structures

Data Flow: a model of material flow through a system

Markov Model (includes transitional matrix): a sequence based on probabilities and chance

Cellular Automata: a set of rules that when followed yield striking patterns

Logic: a rule-based approach to modeling our world

Concept Map: a diagram representing something using concepts and relations

Here is a chart of which model types were discussed in each video:

Paul Fishwick joined UT Dallas in January 2013. He is Distinguished Endowed Chair of Arts and Technology (ATEC) and Professor of Computer Science. He has six years of industry experience as a systems analyst working at Newport News Shipbuilding and at NASA Langley Research Center in Virginia. He pioneered the area of aesthetic computing, resulting in an MIT Press edited volume in 2006. He is a Fellow of the Society for Computer Simulation.

He actively pursues new connections between ATEC and STEM areas such as mathematics and engineering, especially computer science. His research area is in modeling and simulation. He is Director of the Creative Automata Laboratory which has a goal of exploring new representational approaches to automata as well as mathematical and computational models.